Facebook might be putting Messenger’s chats back into its main social media app. The feature is currently in testing and was spotted by app researcher Jane Manchun Wong, and would mean that you could use a single app to access both the social media platform and elements of the messaging service. The change uses the existing Messenger button in the Facebook app, but takes you to a new “Chats” section instead of opening the separate Messenger app.

Messenger was first released as a standalone app back in 2011, and in 2014 Facebook removed its functionality from its eponymous app. Half a decade later, as Facebook prepares to integrate its messaging services across Messenger, Instagram, and WhatsApp, the functionality appears to be returning. 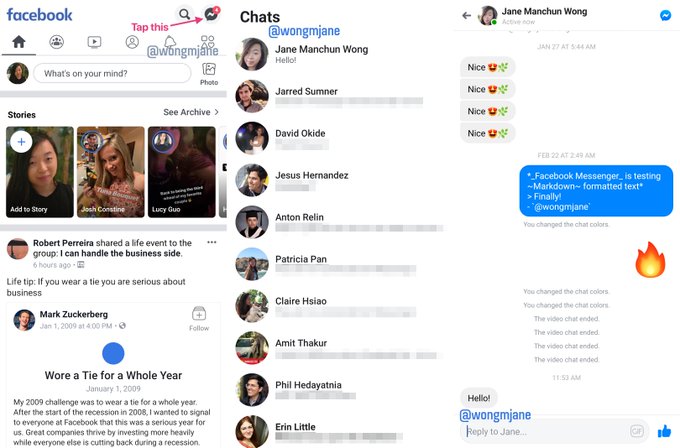 In a follow up tweet, Wong notes that this Chats section only contains a limited selection of Messenger’s features. Although you can use it to send and receive messages, you’ll still need to open the standalone Messenger app to make calls, send photos, or send message reactions.

As part of its messaging integration plans, Facebook reportedly intends for each service’s individual app to continue to exist. Wong speculates that the same is true of the Messenger app, which she believes will be kept around to serve a different audience than the main Facebook app.

Wong’s screenshots of the functionality show Facebook’s proposed white redesign for the app, which was first spotted at the beginning of January, and which we got a better look at in March. The interface closely mirrors Facebook Messenger’s white redesign, which was made widely available at the beginning of this year. It’s unclear when the new Messaging integration or interface might become available.

Update April 12th, 5:20AM ET: Added information about what functionality is available in the new Chats section.

About the Author: anania

Who is the best girl of the planet?

HOW MICROSOFT LEARNED FROM THE PAST TO REDESIGN ITS FUTURE

GAME OF GAME OF THRONES: SEASON 8, EPISODE 3, THE LONG NIGHT

Incredible Places to Visit If You Need Peace and Relaxation

Israel Folau: Australia full-back’s future to be decided at hearing on 4 May

GAME OF GAME OF THRONES: SEASON 8, EPISODE 2, A KNIGHT OF THE SEVEN KINGDOMS

Samsung delays Galaxy Fold indefinitely: ‘We will take measures to strengthen the display’

the Most Instagrammable Boutique Hotels In the World